A unique opportunity for both non-prior and prior service applicants is the New Jersey Army National Guard’s 63rd Army Band. Stationed at the National Guard Training Center in Sea Girt, New Jersey, the 63rd Army Band is proud to have some of the area’s finest professional and amateur musicians as our members. The soldier/musicians of the 63rd meet one weekend each month for rehearsals and performances, and then go on a two-week concert tour each summer. The 63rd, featuring its Concert Band, Jazz Band, Marching Band, and small ensembles, performs regularly for audiences throughout the New Jersey area.

To join the 63rd Army Band, you should possess strong sight-reading skills and be able to perform various musical styles. You will be expected to pass an audition, for which you will need to prepare one solo piece demonstrating your technical and musical skills. At your audition you will be asked to perform your solo piece, play your scales, and do some sight-reading. After passing your audition, you will need to pass the Army’s physical examination and meet other standards required to enlist in the Army National Guard. Like all soldiers you will then attend Basic Combat Training followed by 10 weeks at the US Army School of Music in Norfolk, Virginia.

An audition doesn’t have to be your first exposure to the band. If you are interested in getting to know us better, please come and talk to us at one of our public performances.

History of the 63rd

The 63rd Army Band was organized in Atlantic City and federally recognized on October 28, 1947. It was called into federal service during the Korean Conflict and served stateside at Fort Polk, LA.

Permission was given to the New Jersey National Guard to form a Ground Forces Band while the principal unit was still on federal duty. The 63rd Army Band, New Jersey Army National Guard, was then organized and federally recognized on July 2, 1953, in Camden, New Jersey. The band was assigned to the National Guard Training Center at Sea Girt, New Jersey in 1969 and has remained there ever since. 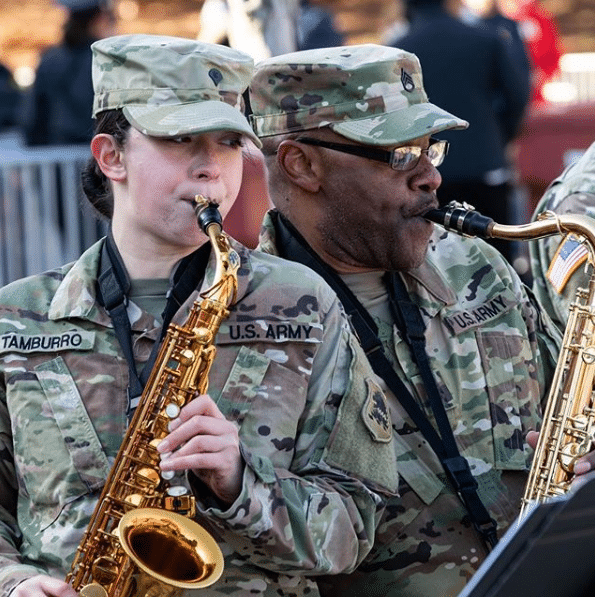 During its history, the 63rd has performed in civilian and military concerts, and participated in parades and ceremonies, which include:

The Band’s awards include the Eisenhower Trophy, the Governor’s Unit Award, and the National Guard Bureau’s Superior Unit Award.

The 63rd Army Band is proud of its many awards and designations, including its C-1 rating, the highest rating a reserve component can attain.

To arrange a visit or to get more information contact the Band.
63RD ARMY BAND